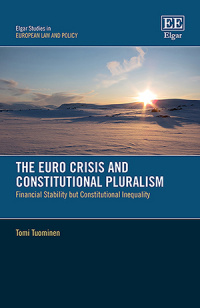 9781800371583 Edward Elgar Publishing
Elgar Studies in European Law and Policy
Tomi Tuominen, University Lecturer in Law, University of Lapland, Finland
Publication Date: 2021 ISBN: 978 1 80037 158 3 Extent: 272 pp
This insightful book assesses the theory of constitutional pluralism in light of the events of the Eurozone crisis of the past decade. Based on an analysis of how national courts reviewed the crisis response mechanisms and participated in the European-level political process, Tomi Tuominen argues that constitutional pluralism is not a valid normative theory of European constitutionalism.

The analysis of crisis response mechanisms focuses on how the lack of a proper economic policy competence for the EU affected the formation of the measures and is at the root of the criticism concerning these mechanisms. Furthermore, the author connects discussions on the Eurozone crisis and constitutional pluralism in an innovative fashion, whilst also explaining how asymmetry and pluralism are linked. A novel reading on the horizontal and vertical aspects of Article 4(2) TEU is also developed throughout.

Utilizing up-to-date and original analyses, The Euro-Crisis and Constitutional Pluralism will be an important read for scholars and students of European law, EU constitutional law and public policy.
Critical Acclaim
‘Through a painstaking, compelling analysis of case law and legislation, Tuominen rejects constitutional pluralism as a normative theory. To corroborate his claim, he points out that the asymmetrical structure of the Economic and Monetary Union, facilitating challenges against EU law by national courts, is unsustainable. Regardless of one’s view on the matter, the book’s arguments will have to be taken into account seriously by EU constitutionalists and legal theorists engaged in the debate on the future of Europe.’
– Massimo Fichera, University of Helsinki, Finland

‘Tomi Tuominen’s book examines a number of key legal developments that have taken place in response to the Euro-crisis, and uses this to challenge the theory of constitutional pluralism. As the book convincingly claims, constitutional pluralism is unsuitable to govern from a normative perspective the EU generally, and EMU specifically – as dramatically proven by the tensions which arose between national courts and the European Court of Justice in response to the Euro-crisis.’
– Federico Fabbrini, Dublin City University, Ireland
Contents
Contents: Preface 1. Introduction: constitutional pluralism as inequality and the asymmetry of the EMU 2. The Fiscal Compact and budgetary discipline 3. The European Stability Mechanism and financial assistance 4. The European Banking Union and the vicious circle
between banks and sovereigns 5. The Outright Monetary Transactions programme and preserving the euro 6. The equality of the Member States and Article 4(2) TEU 7. The role of courts and the question of ultimate interpretive authority 8. The failure of European constitutional pluralism 9. Conclusion: equality instead of pluralism Bibliography Index
Add to Wish List
eBook for individuals
978 1 80037 159 0
From $40.00
Click here for options
eBook for library purchase
978 1 80037 159 0
View sample chapter and check access on: