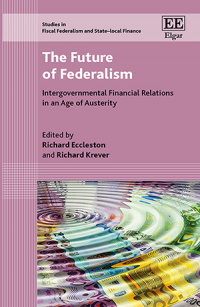 The Future of Federalism

Intergovernmental Financial Relations in an Age of Austerity

9781784717773 Edward Elgar Publishing
Studies in Fiscal Federalism and State-local Finance series
Edited by Richard Eccleston, Director, Institute for the Study of Social Change, University of Tasmania and Richard Krever, Director, Taxation Law and Policy Research Group, Monash Business School, Monash University, Australia
Publication Date: 2017 ISBN: 978 1 78471 777 3 Extent: 400 pp
The crisis and its aftermath had a dramatic short-term effect on federal relations and, as the twelve case studies in this volume show, set in place a new set of socio-political factors that are shaping the longer-run process of institutional evolution and adaptation in federal systems. This illuminating book illustrates how an understanding of these complex dynamics is crucial to the development of policies needed for effective and sustainable federal governance in the twenty-first century.​

More Information
Critical Acclaim
Contributors
Contents
More Information
The global financial crisis had a dramatic short-term effect on federal relations and, as the twelve case studies in this illuminating book show, set in place a new set of socio-political factors that are shaping the longer-run process of institutional change in federal systems. The Future of Federalism illustrates how an understanding of these complex dynamics is crucial to the development of policies needed for effective and sustainable federal governance in the twenty-first century.​ The book finds that growing fiscal pressures are interacting with domestic political variables to produce country-specific federal dynamics.

Arguably the first detailed study of the medium-term impact of the financial crisis and its aftermath on federal governance, this book highlights how growing budget pressures are contributing to increased centralization in many federations, while in others national governments are devolving power to appease regional grievances and preserve the federal union. Contributions from leading federalism and public finance scholars test recent theoretical explanations of change in federal systems against the experiences of a diverse cross-section of federal jurisdictions. The case studies include both established federations and ‘federalizing’ jurisdictions, such as the UK and China, and highlight the complex dynamics which shape the evolution of federal governance.

Comprehensive and interdisciplinary, this timely book will appeal to students and scholars – from political science, economics and law – studying federalism, governance studies and comparative political economy. It is essential reading for public officials and policy-makers interested in intergovernmental relations, public finance and budgeting and tax policy.

Critical Acclaim
‘This book discusses how twelve decentralized countries – some federal, some not – coped with the recent economic crisis. These structured comparative case studies show that the different combinations of rigid and flexible “federal” features found in each country shaped its reaction to changing economic circumstances, both reinforcing the importance of understanding institutional dynamics in analysing decentralized systems and showing that “federalism” (broadly defined) need not be an obstacle to change but may sometimes be the best way a diverse country can accommodate change.’
– Richard M. Bird, University of Toronto, Canada

PART II
2. Beyond the Financial Crisis: The Future of Fiscal Federalism in the United States
Paul L. Posner and Timothy J. Conlan

3. The Financial Crisis and the Future of Federalism in Canada
Douglas M. Brown

5. The Gathering Storm: Federalization and Constitutional Change in the United Kingdom
Simon Lee

PART III
6. German Federalism at the Crossroads: Renegotiating the Allocation of Competencies in a New Financial Environment
Jan Schnellenbach

7. The Future of Swiss Federalism: The Challenge of Fiscal Stabilization Policy in the Absence of Coordination
Nils Soguel

PART IV
10. The Financial Crisis and the Challenge of Fiscal Federalism in China: The 2008 Stimulus and the Limits of China’s Intergovernmental System
Christine Wong

PART V
14. Intergovernmental Financial Relations in an Age of Austerity: Implications for the Future of Federalism
Richard Eccleston, Richard Krever and Peter Mellor