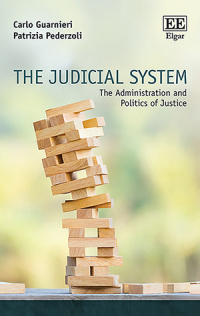 9781800888425 Edward Elgar Publishing
Carlo Guarnieri, Alma Mater (Honorary) Professor of Political Science and Patrizia Pederzoli, Professor, Department of Political and Social Sciences, University of Bologna, Italy
Publication Date: 2021 ISBN: 978 1 80088 842 5 Extent: 232 pp
This timely book explores the expansion of the role of judges and courts in the political system and the mixed reactions generated by these developments. In this comprehensive book, Carlo Guarnieri and Patrizia Pederzoli draw on a wealth of experience in teaching and research in the field, moving beyond traditional legal analysis and providing a clear, concise and all-encompassing introduction to the phenomenon of the administration of justice and all of its traits.

More Information
Critical Acclaim
Contents
More Information
Exploring the growing significance of the administration of justice in both democratic and non-democratic countries, often labeled as ‘the judicialization of politics’, this timely book considers how increased levels of interest in the analysis of judicial institutions have been triggered. It examines the expansion of the role of judges and courts in the political system and the mixed reactions generated by these developments.

In this comprehensive book, Carlo Guarnieri and Patrizia Pederzoli draw on a wealth of experience in teaching and research in the field, moving beyond traditional legal analysis and providing a clear, concise and all-encompassing introduction to the phenomenon of the administration of justice and all of its traits. Facilitating a deeper understanding of the concrete dynamics characterizing the judicial system and its relationships with the political environment, it also offers a balanced assessment of the process of judicialization.

Students and scholars interested in comparative law and politics, and law and society, who wish to broaden their understanding of courts and the operation of the judicial system will find this to be a valuable resource. The wide coverage of cases from both common and civil law traditions will also appeal to practitioners.

Critical Acclaim
‘This book is a brilliant interdisciplinary introduction to the role of the courts and their judicial actors in the current time of political transition. The authors not only elaborate on the dynamic role between politics and courts in a long-term perspective within constitutional and judicial cultures, but they also analyze the increasingly expansive constitutional justice within a strong “culture of rights”. This is a first class book in the fields of human rights law, constitutional law, procedural law, political science and comparative legal history.’
­– Kjell Å Modéer, Lund University, Sweden

‘This book will be invaluable for specialists in both law and political science who conduct research on comparative politics, comparative law, and law and politics. It is also accessible enough to serve as a core text in courses on comparative politics, and the judicial process. No other single book has such depth and scope.’
– Malcolm M. Feeley, University of California, Berkeley, US
Contents
Contents: 1. The Judge: A New Actor in the Political Landscape 2. Doing Justice 3. The Judicial System: Access to Courts 4. The Judicial System: Adjudication 5. The Judiciary 6. Models of judicial decision-making 7. Theories of Judicial Power 8. The Expansion of Judicial Power: Cases 9. Courts and Politics: What Relationships? Bibliography Index