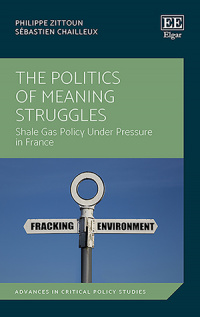 More Information
Critical Acclaim
Contents
More Information
Working to demystify the enigmatic process behind unexpected policymaking, this important book proposes to understand the significance of meaning struggles and the uncertainty provoked by the multiple pressures in governmental decision making. Using the French case, where the government shifted position 3 times before banning hydraulic fracturing, The Politics of Meaning Struggles addresses the wider phenomenon of governmental shifts in policy decisions through a new perspective, a pragmatist constructivism approach.

This controversial governmental U-turn is thoroughly analysed through the meticulous reconstitution of multiple debates which took place not only in the public arena but also in the privacy of government. Based on 3 years of investigation and 52 lengthy qualitative interviews across the hierarchical levels of the bureaucracy including former ministers, and through exclusive access to the archive of Prime Minister, the authors allow us to better understand the complexity and uncertainty in the policy process, which has yet to be explained by classical theories, frameworks and concepts. It builds from the oversights of existing policy approaches to create a more comprehensive understanding as to why State decisions, pressured by power struggles and mutating proposals, are never written in advance.

Working towards gaining a better grasp of the complexity and diversity of public policies, this insightful book will be invaluable to public policy students and scholars. It will also be particularly useful to policy makers working within the gas industry and wider governmental roles that involve policy and decision making.

Critical Acclaim
‘Drawing inspiration from the politics of meaning creation, this fresh perspective of pragmatist constructivism proposes an explanation of public policy not as a coherent whole but as an investigation of interrelated micro-phenomena of semantic confrontation and power struggles in diverse discourse forums. Analytically rich and methodologically sophisticated, it helps us understand how facts and coalitions are built through political conflict and contestation in different settings to shape public policies that discuss, support, change or abandon established courses of action.’
– Nikolaos Zahariadis, Rhodes College, US

‘Through the lens of their Pragmatist Constructivist Framework, Zittoun and Chailleux provide an eye-opening, and to some extent jaw-dropping, account of the French Government’s reversals on fracking policy. By detailing the why, where, when and how of definitional struggles animating French fracking policy, they offer many insights into how policy “problems” and “solutions” are made and unmade. A brilliant evocation of the politics of meaning and how it matters for explaining policy outcomes.’
– Christopher Ansell, University of California, Berkeley, US
Contents
Contents: Introduction to The Politics of Meaning Struggles 1. The containment of the first policy statement about granting licenses 2. The lightning-fast publicization of a tragic problem 3. The impossibility of problem-solving: manufacturing, circulating, and abandoning government proposals 4. The meteoric victory of the fracking ban 5. Locking in the ban, the failure of attempts to challenge the law Conclusion to The Politics of Meaning Struggles Bibliography Index
Add to Wish List
eBook for individuals
978 1 80220 173 4
From $40.00
Click here for options
eBook for library purchase
978 1 80220 173 4
View sample chapter and check access on: