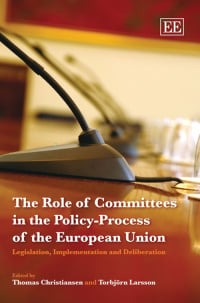 9781845426224 Edward Elgar Publishing
Edited by Thomas Christiansen, Professor of Political Science and European Integration, Department of Political Science, Luiss Università Guido Carli, Italy and Torbjörn Larsson, Stockholm University, Sweden
Publication Date: 2007 ISBN: 978 1 84542 622 4 Extent: 328 pp
This book provides a comprehensive account of the role of the advisory, legislative and implementation committees involved in the policy-making process of the European Union. This is an aspect of EU politics that is often overlooked and remains under-researched, even though such committees can have wide-ranging influence in the policy-process.

More Information
Critical Acclaim
Contributors
Contents
More Information
This book provides a comprehensive account of the role of the advisory, legislative and implementation committees involved in the policy-making process of the European Union. This is an aspect of EU politics that is often overlooked and remains under-researched, even though such committees can have wide-ranging influence in the policy-process.

The group of international scholars contributing to this volume are all experts in their field, coming from different disciplinary backgrounds including political science, law and public administration. The volume combines contributions to a discussion of the normative issues arising from the nature of ‘committee governance’ in the EU with more empirical contributions on the role of committees in each of the stages of the EU policy-process: policy-preparation, legislative decision-making, policy-implementation and adjudication. The result is a text that provides not only a thorough overview of the role of committees in the EU today but also contributes to a deeper understanding of the nature of European governance.

The Role of Committees in the Policy-Process of the European Union will find its audience in final year undergraduate and postgraduate students and researchers of European studies and politics. Practitioners, NGOs and
lobbyists involved in the work of the EU will all find this a uniquely useful book.
Critical Acclaim
‘. . . I discovered a scholarly work on a difficult and technical subject presented by the authors in an open and transparent manner. It is an empirically rich work concentrating on a crucial element of the EU’s policy making process, but one which is not often investigated. Through the detailed case studies included of the myriad of committees the authors have provided a good foundation for that study. As such it will satisfy not only the researcher looking at the committee structure in general but also the researcher concentrating on a specific element of the institutional framework of EU decision making.’
– Pamela M. Barnes, University of Lincoln, UK

‘The book addresses an important and timely aspect of EU affairs and one which, as the authors rightly claim, tends to be neglected in EU studies (perhaps partly because of the complicated nature of the EU committee system, but also because the topic perhaps lacks the glamour of the EU’s “big” policy and institutional questions). . . The book therefore is assuredly not simply a “nuts and bolts” exercise in describing what committees do and how they operate, because it also includes sharp insights into their significance for the overall system of governance in the EU. A subject as complicated as this requires clarity of exposition. The various authors succeed in their aims of providing clear treatments on how the committees work in the various EU institutions and also of the overall role of committees in the EU policy and implementation processes. . . This book is an excellent contribution to the literature in EU studies. The authors are to be congratulated on producing a volume of such high quality and one which will undoubtedly enhance readers’ knowledge of how EU committees work and of their overall place in EU governance. It deserves to command a high place on the reading lists of courses in EU studies and will also be of considerable value to academic specialists working in this field.’
– Robert A. Jones, Sheffield Hallam University, UK

1. Introduction: The Role of Committees in the Policy-Process of the European Union
Thomas Christiansen and Torbjörn Larsson

2. Committees and the Nature of Deliberative Supranationalism in the EU
Torbjörn Larsson

3. Forms of Informal Governance: Searching for Efficiency and Democracy
B. Guy Peters

6. The Role of Committees and Working Groups in the CFSP Area
Simon Duke

7. The Role of European Parliament Committees in the EU Policy-Making Process
Christine Neuhold and Pierpaolo Settembri

10. The Role of the European Court of Justice in the Area of Comitology
Alexander Türk