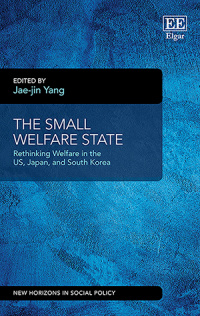 Examining various aspects of welfare states, chapters explore the underlying reasons behind the restraint of social security in these countries. Featuring contributions from international distinguished scholars, this book looks beyond the larger European welfare states to unpack the many common political and institutional characteristics – from labor organization to party politics – that have constrained welfare state development in industrialized democracies.

Offering insight into welfare state development outside of Europe, this book will be crucial reading for scholars of welfare states, especially those working on Asian and US social policy specifically. It will also be of interest to policymakers and social policy experts in government, civil institutions, and international organizations, particularly for those working in developing countries.

Critical Acclaim
‘The Small Welfare State makes a big contribution. With brilliant chapters from leading scholars in the field, it uncovers a distinctive model of social provision that links together an unusual set of countries. It is especially relevant today as welfare states come under strain in a transformed economic world. Highly recommended.’
– Jacob S. Hacker, Yale University, US, Author of The Great Risk Shift and The Divided Welfare State

‘Since its origin, the discipline of Welfare Studies has been dominated by Eurocentrism. Recent research on Asian welfare systems have shown that concepts and models developed in the European context are not always valid in other contexts. In The Small Welfare State, Jae-jin Yang and his colleagues convincingly show that a change of perspective is required. This is not only a matter of geography or size of the welfare state. The issue at stake is to identify different mechanisms and logic. This book is a must-read for anybody interested in the origin, development, and future of welfare systems in the world.’
– Sebastien Lechevalier, Ecole des Hautes Etudes en Sciences Sociales, France
Contributors
Contributors: M. Estévez-Abe, C. Faricy, S. Haggard, Y.-R, Jung, D. Kim, S.-w. Kim, Y.-S. Kim, J. Klein, S.-M. Kwon, D. Oude Nijuis, J.-j. Yang

1 Introduction: towards a political economy of the small
welfare state 1
Jae-jin Yang
2 Narrowly organized labor and the failure of
solidarity-enhancing welfare in the United States and
South Korea 30
Dennie Oude Nijhuis and Jae-jin Yang
3 The business offensive and the limits of employer-provided
welfare in the United States 53
Jennifer Klein
4 Civic movements and the detour to welfare state building
in South Korea 78
Yeong-Soon Kim
5 The effect of electoral rules on the policy preferences and
behavior of politicians in South Korea 99
Jae-jin Yang and Yui-Ryong Jung
6 The electoral bases of small tax states in Japan, South
Korea, and the US 114
Margarita Estévez-Abe, Jae-jin Yang, and Christopher
Faricy
7 Why welfare state building is of secondary importance to
leftists in Japan and South Korea 140
Soon-Mee Kwon
8 The development of functional equivalents to the welfare
state in post-war Japan and South Korea 163
Dokyun Kim
9 Weak social security but strong employment security in
the Japanese welfare state 190
Sung-won Kim
10 Path dependence and possibilism: the American, Korean,
and Japanese welfare states in comparative perspective 211
Stephan Haggard