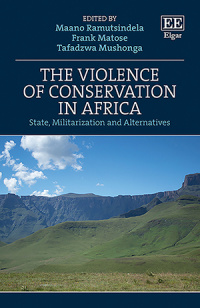 The Violence of Conservation in Africa

9781800885608 Edward Elgar Publishing
Edited by Maano Ramutsindela, Professor of Geography, Department of Environmental and Geographical Science, Frank Matose, Co-Director, Environmental Humanities South Centre, University of Cape Town and Tafadzwa Mushonga, Postdoctoral Research Fellow, Centre for the Advancement of Scholarship, University of Pretoria, South Africa
Publication Date: 2022 ISBN: 978 1 80088 560 8 Extent: 272 pp
Offering insights on violence in conservation, this timely book demonstrates how and why the state in Africa pursues conservation objectives to the detriment of its citizens. It focuses on how the dehumanization of black people and indigenous groups, the insertion of global green agendas onto the continent, a lack of resource sovereignty, and neoliberal conservation account for why violence is a permanent feature of conservation in Africa.

Chapters uncover various forms of violence experienced on the continent, revealing the local and global conditions that enable them, and propose pathways towards non-violent conservation. The book concludes that the ideology of conservation is also an ideology about people. Crucially, it highlights the implications of increasing investment in violent instruments and the institutionalization of militarized approaches for conservation, the state, and ordinary people.

Scholars and students of political ecology and environmental policy and planning will greatly benefit from this book’s drawing together of perspectives encompassing green violence and the militarization of conservation. It will also be an invigorating read for African studies researchers looking at coloniality and the re-evaluation of the African state, particularly through the lens of nature conservation.

Critical Acclaim
‘This volume traces the trajectory of the dominant conservation narratives and approaches in Africa, and reveals the myriad ways in which contemporary conservation ideologies and practices reproduce colonial conservation ideologies and practices. The chapters compiled into this volume illuminate the contradictions and contestations of the dominant conservation approaches, and propose alternatives that can produce beneficial outcomes for both people and nature. This book is an important contribution to our understanding of conservation, and is a must read for those who want to envision a conservation which will guarantee sustainable outcomes.’
– James C. Murombedzi, United Nations Economic Commission for Africa, Ethiopia

‘The Violence of Conservation in Africa presents a sobering assessment of the toll in human suffering paid by ordinary citizens living in or near Africa's national parks and reserves. The essays reveal the undeniable coloniality of thought permeating twenty-first century nature conservation practices, linking the preservation of Africa’s charismatic wildlife to a long history of “violence against black bodies”. The editors have brought together mostly authors based in African NGOs and universities, giving voice to those close to events on the ground. This is a must read for anyone interested in protecting Africa’s biodiversity without sacrificing the human rights of common citizens.’
– Rod Neumann, Florida International University, US

‘The Violence of Conservation in Africa explores the vexed question of why conservation action in Africa is so often associated with violence and militarisation. Maano Ramutsindela, Frank Matose and Tafadzwa Mushonga have brought together a strong team of African researchers and practitioners to explore this strain of “green” violence through case studies. In a far-reaching and important book, they ask where conservation violence emerged, why it persists, and whether it is inevitable. They call for a future of non-violence in nature conservation, for the sake of both people and non-human nature.’
– Bill Adams, University of Cambridge, UK, and The Graduate Institute, Switzerland
Contributors
Contributors: Amber Abrams, Shaun Cozett, Dina Dabo, Guy Patrice Dkamela, Tania Katzschner, Tichayana Konono, Esther Marijnen, Frank Matose, Anselmo Matusse, Joseph E. Mbaiwa, Emmanuel Mogende, Tafadzwa Mushonga, Samuel Nguiffo, Bridget Pitt, Maano Ramutsindela, Olekae Tsompi Thakadu, Simphiwe Tsawu, Nelisiwe Vundla

PART I DIMENSIONS OF VIOLENT CONSERVATION
IN AFRICA
1 Conservation and violence in Africa 2
Maano Ramutsindela, Frank Matose and Tafadzwa Mushonga
PART II THE MILITARIZATION OF CONSERVATION
2 The state and contested natural resources in Africa 23
Frank Matose, Dina Dabo, Tichayana Konono and Simphiwe Tsawu
3 The violence of greening the state in Africa 38
Emmanuel Mogende and Maano Ramutsindela
4 The coloniality of “crisis conservation”: the
transnationalization and militarization of Virunga National
Park from an historical perspective 53
Esther Marijnen
5 Violent forests, local people and the role of the state in
Zimbabwe 73
Tafadzwa Mushonga
6 The new turn in the militarization of conservation in
Cameroon, Central Africa 90
Guy Patrice Dkamela and Samuel Nguiffo