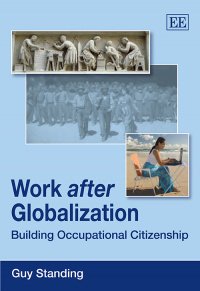 Karl Polanyi’s The Great Transformation marked the rise of industrial citizenship, which hinged on fictitious labour decommodification. Since the 1970s, this has collapsed and a Global Transformation is under way, in which inequalities and insecurities are becoming unsustainable. Guy Standing explains that while a struggle against paternalism is essential, the desirable egalitarian response to the problems caused by globalization is a strategy to build occupational citizenship. This is based on a right to universal economic security and institutions to enable everybody to develop their capabilities and work whilst respecting the ecological imperatives of the 21st century. The book also explores a phasing out of labour law and a re-orientation of collective bargaining towards collaborative bargaining, highlighting the increased importance of the relationship between groups of workers and citizens as well as between workers and capital.

Work after Globalization offers a new perspective on work, rejecting the labourist orientation of the 20th century. Social scientists interested in globalization and labour market issues will warmly welcome this book. It will also strongly appeal to students, researchers, policy-makers, social activists and those connected with the international regulation of occupations.
Critical Acclaim
‘. . . this book is a tour de force, providing a provocative analysis as well as a vision, rooted in normative reflection for a better world to work in. It should be mandatory reading for all students of social policy and industrial relations.’
– Martin Seeleib-Kaiser, Journal of Social Policy

‘In Work after Globalization, Guy Standing, one of the most knowledgeable and theoretically sophisticated scholars in the area of labor relations today, paints a rich panorama of contemporary labor practices around the world to demonstrate that we are in the midst of a societal shift of historical dimensions. Standing’s concept of occupational citizenship provides a way to re-capture both human agency and community, thereby reconciling the individual with society and flexibility with new forms of social security. This book is a tour de force for its sweeping scope, incisive analysis, and predictive power.’
– Katherine Stone, University of California, Los Angeles, US
Contents
Contents: Preface 1. Work and Labour in Great Transformations 2. Fictitious Decommodification: The Failure of Industrial Citizenship 3. Labour Recommodification in the Global Transformation 4. Inequality, Class and the ‘Precariat’ 5. Crumbling Barriers to Decommodification 6. Occupational Dismantling and Commodification 7. Occupational Regulation 8. The Horror 9. Reviving Occupation in Full Freedom 10. Economic Rights: The Progressive Agenda Bibliography Index
Add to Wish List