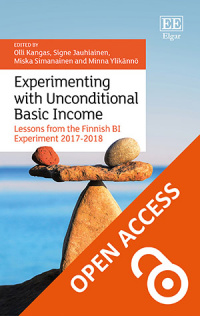 9781839104848 Edward Elgar Publishing
Edited by Olli Kangas, Director, Equal Society Strategic Research Programme, Academy of Finland and Professor of Practice, Department of Social Research, University of Turku, Signe Jauhiainen, Senior Researcher, Miska Simanainen, Researcher, Research Unit, Social Insurance Institution of Finland and Minna Ylikännö, Specialist, Ministry of Economic Affairs and Employment and Adjunct Professor, Department of Social Research, University of Turku, Finland
Publication Date: 2021 ISBN: 978 1 83910 484 8 Extent: 224 pp
This discerning book provides a comprehensive analysis of the nationwide randomised Finnish basic income experiment 2017 to 2018, from planning and implementation through to the end results. It presents the background of the social policy system in which the experiment was implemented and details the narratives of the planning process alongside its constraints, as well as a final evaluation of the results.

More Information
Critical Acclaim
Contributors
Contents
More Information
This insightful book provides a comprehensive analysis of the nationwide randomised Finnish basic income experiment 2017 to 2018, from planning and implementation through to the end results. It presents the background of the social policy system in which the experiment was implemented and details the narratives of the planning process alongside its constraints, as well as a final evaluation of the results.

Empirical chapters analyse the outcomes of the experiment in relation to the employment, health and well-being, in various forms, of the recipients of unconditional income transfer. Phenomenological aspects of living on basic income, based on face-to-face interviews, are also reported, as well as media discourse on the experiment and its results. This thought-provoking book concludes with an examination of the political feasibility of basic income in Finland.

Offering important lessons on the planning and implementation of such experiments in a developed welfare state, this unique book will be a vital resource for scholars and students of social policy, welfare economics, basic security and basic income.

Critical Acclaim
‘The editors of this brilliant volume argue that basic income is the “money of trust”. Basic income advocates and critics alike will read this book to unpack and correct the media portrait of an ambitious experiment designed to determine the extent to which we can or should trust one another and our social institutions. Researchers will be, by turns, fascinated and terrified by the “politics” of conducting controversial social experiments on vulnerable human beings under the gaze of the international media.’
– Evelyn L. Forget, University of Manitoba, Canada

‘There has never been anything as close to a real basic income experiment in developed countries as the one conducted in Finland in 2017-2018. This book is an extremely useful, no-nonsense, multi-disciplinary analysis of its results and its limits, of the political constraints it faced and the political impact it had. No one amongst the many around the world who are setting up, advocating or studying basic income experiments can afford to ignore it.’
– Philippe Van Parijs, University of Louvain, Belgium and Basic Income Earth Network

‘The Finnish experiment providing unconditional basic income to a selection of its citizens has been closely observed internationally by policymakers, academics and even the wider public. In this important book, researchers who were all directly involved in the planning, implementation and analysis of the experiment and its effects describe and evaluate its various stages. Most interestingly, they also give detailed insights into how basic income was experienced by its recipients, and what it has meant for them in terms of labour market participation, health, well-being, and social capabilities.’
– Wim van Oorschot, University of Leuven, Belgium