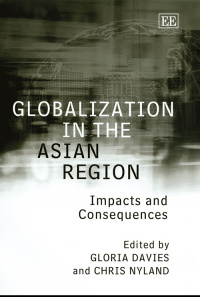 Globalization in the Asian Region

9781845422196 Edward Elgar Publishing
Edited by Gloria Davies, Senior Lecturer, School of Languages, Cultures and Linguistics, Faculty of Arts and Chris Nyland, Professor, Department of Management, Faculty of Business and Economics, Monash University, Australia
Publication Date: 2005 ISBN: 978 1 84542 219 6 Extent: 256 pp
Bringing together contributors from both the university sector and business-centered research institutions, this comprehensive volume offers diverse perspectives on the impacts and consequences of globalization in different parts of the Asian region.

More Information
Critical Acclaim
Contributors
Contents
More Information
Bringing together contributors from both the university sector and business-centered research institutions, this comprehensive volume offers diverse perspectives on the impacts and consequences of globalization in different parts of the Asian region.

Each chapter offers a substantial account of globalization within a particular nation-state or area in the region. Different understandings underpin the chapters. Some contributors perceive globalization as progress in the form of economically driven processes that have made nations mutually dependent in unprecedented and complex ways. Others emphasize the uneven outcomes of globalization, as well as the stakes for economic growth and social order in the global climate of deepening political and religious divisions since September 2001.

General and specialist readers alike will gain an appreciation of the myriad emphases placed on globalization within different nations and from various vantage points. The book showcases diverse styles of discourse and serves to greatly broaden the scope of what can be discussed under the rubric of ‘globalization’ within a single volume.
Critical Acclaim
‘For anyone seeking a diverse range of perspectives on globalisation in the Asia-Pacific region, this collection of highly readable essays is a good place to start. Focusing on individual countries, the chapters examine the specific modalities of global integration and the responses of different sections of society in each country. The authors address questions of major importance for democratic societies, such as: the connection between globalisation and the rise of religious extremism; whether globalisation is in reality a new form of imperial preference; who the winners and losers are. These are complemented by three short case studies dealing with Indonesia’s unrealised potential, foreign investment in China and patterns in the movement of people between Hong Kong and the mainland. The essays provide a rich source of thought-provoking analysis of the complex cultural and political responses arising from both opportunities provided by globalisation and its more negative impacts.’
– Melanie Beresford, Macquarie University, Australia

‘Globalization in the Asian Region draws confident ragged lines across disciplines, themes and the conventional boundaries of scholarship. The range of material in the anthology is astounding. The diversity and admixture of political positions and approaches is confronting. Contemporary Asia is thus mapped without overgeneralizing a homogenous whole.’
– Paul James, RMIT University, Australia

‘This collection of thoughtful essays provides a reliable picture of the dynamic and often ironic operation of globalization in Asia today and challenges individuals to believe that as communities we have a choice in how we respond and contribute to globalization. The editors highlight the multifaceted nature of globalization and bring to the fore its supraterritoriality. A dozen detailed studies make good on these claims from analyses of American militancy since 9-11, terrorism, and poverty, to case studies on Malaysia, Indonesia, India, Australia, New Zealand, Japan, and China. These essays make clear the interactive nature of globalization as various economic, cultural, and political forces pour into Asian societies while the impact of their responses from exports to currency fluctuations to migration flows to transnational religious movements in turn reshape the selfsame globalization process.’
– Timothy Cheek, University of British Columbia, Canada
Contributors
Contributors: J. Ballingall, P. Briggs, G.D. Bouma, G. Davies, V.M. Desai, J.C.Y. Lee, R.Y.W. Lee, R. Mouer, C. Nyland, R.C. Rice, J. Smith, R. Smyth, I.F. Sulaiman, T. Siew-Yean, M. Vicziany, V. Wee, D. Wright-Neville
Contents
Contents: Preface Views of Globalization, Empire and Asia: An Introduction 1. ‘Globalization’ After 9/11 and the Iraq War: Implications for Asia and the Pacific 2. Terrorism as a Global Phenomenon: The Southeast Asian Experience 3. Globalization and Poverty 4. The Impact of Globalization on Malaysia 5. (Case Study 1) Globalization and the Indonesian Economy: Unrealized Potential 6. Globalization and Hindutva: India’s Experience with Global Economic and Political Integration 7. Australian Roadmaps to Globalism: Explaining the Shift from Multilateralism to Imperial Preference 8. Globalization: A New Zealand Perspective 9. Globalization and Japan after the Bubble 10. Globalization, Late Industrialization and China’s Accession to the WTO: A Critical Perspective on Close Integration 11. (Case Study 2) A Glimpse of FDI in China and Related Issues 12. (Case Study 3) The Movement of People: Interflows between Hong Kong and Mainland China Index