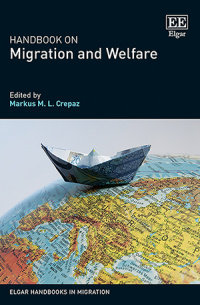 9781839104565 Edward Elgar Publishing
Elgar Handbooks in Migration
Edited by Markus M.L. Crepaz, Josiah Meigs Distinguished Teaching Professor of Political Science, School of Public and International Affairs, University of Georgia, Athens, US
Publication Date: 2022 ISBN: 978 1 83910 456 5 Extent: 544 pp
Bringing together prominent scholars in the field, this Handbook provides an interdisciplinary exploration of the complex interrelationship between migration and welfare. Chapters further examine the effects of emigration on sending societies exploring issues such as the impact of remittances, diasporas, and skill deterioration as a result of human capital flight on capacity building and on economic and political development more generally.

More Information
Critical Acclaim
Contributors
Contents
More Information
Bringing together prominent scholars in the field, this Handbook provides an interdisciplinary exploration of the complex interrelationship between migration and welfare. Chapters explore the extent to which immigration policy affects – and is affected by – welfare states, from both economic and political perspectives. This Handbook also examines the effects of emigration on sending societies, exploring issues such as the impact of remittances, diasporas, and skill deterioration as a result of human capital flight on capacity building and on economic and political development more generally.

Contributors draw on both qualitative and quantitative research to illuminate the contours and patterns of this complex relationship. This includes the assumed tension-reducing role of multiculturalist and integration policies, the shaping of native beliefs about migrants by socio-economic constraints and the potential for the extension of social rights to migrants to influence and increase pro-redistributive attitudes. Investigating the drivers of welfare chauvinism and its effects on social trust between native and immigrant groups, the Handbook also provides insights into the latest theoretical and empirical findings regarding the progressive’s dilemma, one of the most formidable policy challenges leaders of modern societies face.

Breaking new theoretical and empirical ground, this cutting-edge Handbook is essential reading for academics, researchers and students in political science, economics, sociology, social policy and political philosophy, particularly those focused on global migration and changing attitudes to welfare. It will also benefit policymakers looking for new data and pioneering perspectives on immigration policy and the future of welfare states in a changing world economy.

Critical Acclaim
‘Migration and welfare spell an uneasy relationship. Membership and deservingness have come to delineate newcomers' access to social goods in host societies across the globe. Yet there is no unitary relationship between the entities. Context and politics matter. This Handbook delivers a unique set of analyses to grasp these complexities.’
– Grete Brochmann, University of Oslo, Norway

Introduction to the Handbook on Migration and Welfare: The contours of
contested concepts 1
Markus M. L. Crepaz

PART I TAKING STOCK: MIGRATION AND THE STATE OF THE
WELFARE STATE
1 Managing migration in modern welfare states: One-size policy does not
fit all 13
Pieter Bevelander and James F. Hollifield
2 Economics or politics? Assessing immigration as a challenge to the welfare
state 45
Maureen A. Eger
3 Migration, diversity, and the welfare state: Moving beyond attitudes 64
Patrick R. Ireland

PART II IS SOCIAL HOMOGENEITY A PRECONDITION FOR
REDISTRIBUTION?
4 Why share with strangers? Reflections on a variety of perspectives 87
Matthew Wright
5 The boundaries of generosity: Membership, inclusion, and redistribution 102
Allison Harell, Will Kymlicka, and Keith Banting
6 Immigration and preferences for redistribution: Empirical evidence and
political implications of the progressive’s dilemma in Europe 118
Elie Murard
7 When does immigration shape support for a universal basic income?
The role of education and employment status 137
Anthony Kevins
8 Welfare chauvinist or neoliberal opposition to immigrant welfare? The
importance of measurement in the study of welfare chauvinism 156
Edward Anthony Koning
9 Personal and contextual foundations of welfare chauvinism in Western
Europe 175
Conrad Ziller and Romana Careja

PART V THE VIEW FROM THE GLOBAL SOUTH: THE EFFECTS
OF MIGRATION ON ORIGIN COUNTRIES
23 The Janus face of remittances: Do remittances support or undermine
development in the Global South? 442
Farid Makhlouf and Oussama Ben Atta
24 Tracing the links between migration and food security in Bangladesh 470
Mohammad Moniruzzaman and Margaret Walton-Roberts
25 Migration as a development strategy: Debating the role that migrants
and those in diaspora can play 488
Elizabeth Mavroudi
26 The migration–development nexus under scrutiny 504
Ra.l Delgado Wise