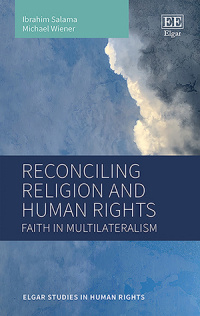 More Information
Critical Acclaim
Contents
More Information
Projecting a global interdisciplinary vision, this insightful book develops a peer-to-peer learning methodology to facilitate reconciling religion and human rights, both in multilateral contexts and at the national level. Written by leading human rights practitioners, the book illuminates the tension zones between religion and rights, exploring how the ‘faith’ elements in both disciplines can create synergies for protecting equal human dignity.

Ibrahim Salama and Michael Wiener analyse the place of religion in multilateral practice, including lessons learned from the ‘Faith for Rights’ framework. Based on the jurisprudence of international human rights mechanisms, the book clarifies ambiguities of human rights law on religion. It also unpacks the potential positive role of non-State actors in the religious sphere, demonstrating that the relationship between religion and human rights is not a zero-sum game. Ultimately, the book empowers actors on both sides of the ideological fence between religion and human rights to deconstruct this artificial, politically instrumentalized dichotomy.

This innovative book will be a vital resource for faith-based actors, human rights defenders and policymakers working at the intersection between religion, culture and human rights. With the co-authors’ commentary on the #Faith4Rights toolkit, it will also be invaluable for peer-to-peer learning facilitators, scholars and students of human rights law, public international law and religious studies.

Critical Acclaim
‘This book gives a carefully considered account of seeking to bring about sustainable human rights change in a particularly polarised space, inverting the contention around religion and human rights to set out an approach for the positive role of faith-based actors in advancing human rights.’
– Nazila Ghanea, University of Oxford, UK

‘The foundational concept of an "inherent dignity ... of all members of the human family" (1948 UDHR) deeply resonates in various religious and philosophical teachings. Ibrahim Salama and Michael Wiener demonstrate how we can effectively benefit from faith traditions in today's fight for universal rights across boundaries. A book both profound and highly practical!’
– Heiner Bielefeldt, Friedrich-Alexander-Universität Erlangen-Nürnberg, Germany and former UN Special Rapporteur on Freedom of Religion or Belief

‘This book offers a holistic approach to the relationship between religion and human rights. Holistic is an often overused, and at times, misleading adjective. This is not the case with this book. It offers solutions without undermining inherent challenges present in these fields. It explores the relationship between religion and all human rights, not only freedom of religion or belief. It can be a powerful tool for believers, as well as agnostics and atheists. It also provides a framework to equip not only religious leaders but also—as I have repeatedly employed in various situations—judges, politicians, and other civil servants who frequently struggle with these issues. While a comprehensive analysis and framework in this area may appear overly ambitious, the authors have vast expertise on the topic and have successfully tested its framework. Therefore, this book is a must-read for anyone working on the intersection of human rights and religion.’
– Thiago Alves Pinto, University of Oxford, UK

‘One of the most authoritative reflections on the linkages between the realms of faith and the imperatives of human rights. This is not only conceptually well-argued, but is a roadmap to human rights, achieved through a model we pioneered for UN outreach with faith actors: peer to peer learning.’
– Azza Karam, Vrije Universiteit Amsterdam, the Netherlands and Religions for Peace International
Contents
Contents: 1. Prologue 2. Introduction: rationale of this book 3. Human rights law approaches to religion: the dancing shadows 4. Facilitating faith for rights 5. Prospects of mutual enhancement 6. Epilogue Bibliography Index
Add to Wish List
eBook for individuals
978 1 80037 760 8
From £25.00
Click here for options
eBook for library purchase
978 1 80037 760 8
View sample chapter and check access on: