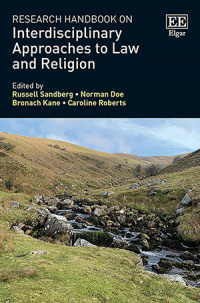 Research Handbook on Interdisciplinary Approaches to Law and Religion

9781784714840 Edward Elgar Publishing
Edited by Russell Sandberg, Norman Doe, Bronach Kane and Caroline Roberts, Cardiff University, UK
Publication Date: 2019 ISBN: 978 1 78471 484 0 Extent: 464 pp
Following 9/11, increased attention has been given to the place of religion in the public sphere. Across the world, Law and Religion has developed as a sub-discipline and scholars have grappled with the meaning and effect of legal texts upon religion. The questions they ask, however, cannot be answered by reference to Law alone therefore their work has increasingly drawn upon work from other disciplines. This Research Handbook assists by providing introductory but provocative essays from experts on a range of concepts, perspectives and theories from other disciplines, which can be used to further Law and Religion scholarship.

More Information
Critical Acclaim
Contributors
Contents
More Information
Law and religion, as a subdiscipline of law, has gained increasing attention in recent years. However, the complex relationship between law and religion cannot be fully understood with reference to legal research alone. This Research Handbook includes provocative chapters from experts on a range of concepts, perspectives and theories, drawing on a variety of disciplines, which can be used to further law and religion scholarship.

Featuring chapters written by authors from a diverse range of backgrounds, the Handbook focuses on five main perspectives on law and religion: historical, philosophical, sociological, theological and comparative. Each chapter provides a new way of looking at law and religion which can complement and enhance a doctrinal legal understanding of the topic. Crucially, this Handbook also highlights the importance of recognising doctrinal legal study as an approach in itself, which will shape research questions and outputs accordingly.

Providing an engaging and thoughtful introduction to the range of interdisciplinary approaches that can be taken to law and religion, this Handbook will be of interest to scholars in law and religion, theologians, sociologists, legal historians and political scientists. It will provide a rich foundation for future interdisciplinary research in this important area of study.
Critical Acclaim
‘In the United Kingdom the study of law and religion is now an established sub-discipline with academic legal studies, itself an ever-expanding and ever-more adventurous part of the university. In this book Professor Sandberg and his colleagues from Cardiff University, an acknowledged centre for the study of law and religion, have brought together scholarship from a range of authors, mainly based in or from the United Kingdom, which attests to the vitality and breadth of work being done in the area.’
– Anthony Bradney, Keele University, UK
Contributors
Contributors: L.G. Beaman, L. Bell, P. Billingham, C.G. Brown, J. Burnside, J. Chaplin, B. Clark, D. Dabby, N. Doe, D. Ezzy, M.A. Failinger, P. Fitzpatrick, D.J. Hill, B.C. Kane, J. Machielson, M. McIvor, T. Modood, P. Monti, A. Nazir, J. Neoh, L.İ. Öztığ, D. Perfect, S. Perfect, C. Roberts, R. Sandberg, S. Thompson, M. Travers, C. Ungureanu, D. Whistler, J. Yorke

4. ‘Moved and Seduced by the Instigation of the Devil’: Witchcraft and the Law, 1450-1700
Jan Machielson

10. ‘Gods Would be Needed…’: Derrida on Law and Religion
Peter Fitzpatrick

12. The Lure of Luhmann: A Systems Theory of Law and Religion
Russell Sandberg

14.Religion or Belief, Equality and Human Rights Law and the Media
David Perfect and Simon Perfect

Part V: Comparative Approaches
18. A Comparative Method for the Study of Law and Religion: Is this a Defensible Methodology?
Brigitte Clark

19. Monotheism and the Death Penalty: Towards a Homogenous Exegesis for Abolition
Jon Yorke and Amna Nazir

20. The Turkish Constitutional Court Rulings on the Headscarf: The Construction of Villains and Victims
Laçin İdil Öztığ

21. Diversity in Death: A Case Study of a Muslim Cemetery Project in Quebec
Dia Dabby and Lori G Beaman

Advanced Introduction to the Sociology of the Self