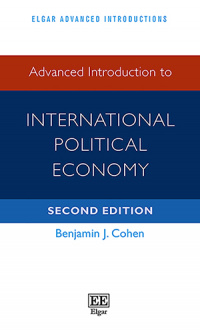 9781788971560 Edward Elgar Publishing
Elgar Advanced Introductions series
Benjamin J. Cohen, Distinguished Professor Emeritus, Department of Political Science, University of California, Santa Barbara, US
Publication Date: 2019 ISBN: 978 1 78897 156 0 Extent: 168 pp
This book, now in its second edition, provides a comprehensive and up to date survey of the field of International Political Economy. Although the subject’s roots go far back, the modern field has developed along sharply divergent paths followed by different clusters of scholars. Today there are multiple versions of IPE, each with its own distinct personality. This book illuminates the full array of analytical styles and traditions to be found across the globe in this rich field of study.

Now in its second edition, Benjamin J. Cohen’s introduction provides a comprehensive and up-to-date global survey of the field of international political economy. With detailed discussions regarding the divergent paths of different schools of thought in the field, this unique guide explores the links between contending factions. This Advanced Introduction gives students access to the multiple analytical styles and traditions of all perspectives in this rich field of study.

Key features of the second edition:

• Concise introduction to the field in an accessible, non-technical form updated with the most recent discussions in IPE

Written in a concise and dynamic style, this Advanced Introduction serves as a thoughtful entry point text for advanced undergraduate and graduate students, as well as being an excellent go-to resource for scholars specializing in international political economy.

‘Benjamin J. Cohen’s Advanced Introduction to International Political Economy evaluates the fragmented intellectual landscape of international political economy and suggests points of convergence, if not integration, among its varied elements. His analysis is wide-ranging and balanced, geographically and in its examination of a variety of standpoints; it is engaging in its combination of sympathy and criticism. All advanced students of the field will benefit from reading it.’
– Robert O. Keohane, Princeton University, US

‘There is no better guide through the terrain of international political economy. Jerry Cohen has been a major contributor since the contemporary field emerged in the late 1960s at the intersection of international relations and international economics. He remains a superbly clear writer with first-hand knowledge of the key developments in what is now a truly global discipline. I recommend this book enthusiastically for introductory courses at the undergraduate or graduate levels.’
– Louis W. Pauly, University of Toronto, Canada

‘A concise, readable and deeply informed survey of different approaches to international political economy. Essential reading for students in the field. Even advanced professionals will appreciate the diversity of perspectives examined. Cohen aims to create a more open field of IPE that appreciates and learns from difference. This book is a major contribution towards that goal.’
– David A. Lake, University of California, San Diego, US

‘Jerry Cohen occupies that rare position from which, when he defines a field, other people sit up and take notice. Here, his experience, insight and vision are brought to bear on how best to define international political economy (IPE) for students who are already familiar with its basic subject matter. Written with his usual panache and in his usual engaging prose, this is a must-read book for both advanced students of IPE and the people who teach them.’
– Matthew Watson, University of Warwick, UK
Contents
Contents: 1. Introduction 2. The American school 3. America’s “Left-Out” 4. The British school 5. Britain’s “Far-Out” 6. Continental Europe 7. Latin America 8. China 9. The geography of IPE 10. What have we learned? Index