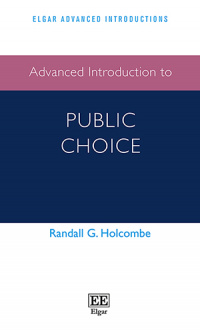 9781785362040 Edward Elgar Publishing
Elgar Advanced Introductions series
Randall G. Holcombe, DeVoe Moore Professor of Economics, Florida State University, US
Publication Date: 2016 ISBN: 978 1 78536 204 0 Extent: 168 pp
Using public choice economic methods, this Advanced Introduction presents a focused narrative about political decision-making based on the work that has defined the discipline. Each chapter ends with a Notes section to discuss the research on which the chapter is based, with an emphasis on the pioneering work that has shaped the development of public choice. Randall G. Holcombe emphasizes the theoretical foundations of public choice, with the idea that it offers a context within which empirical research can be understood. This book successfully explores the political decision-making process for readers and ensures that they understand how preferences of citizens are aggregated to produce public policies.