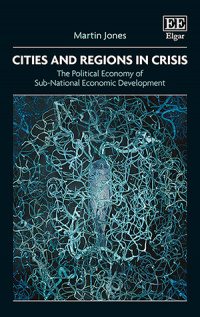 Theoretically innovative and empirically focused, this timely book is a must-read for researchers and policy-makers of urban geography, regional development, political economy and public policy.
Critical Acclaim
‘Cities and Regions in Crisis presents a rich and insightful analysis of urban and regional governance in England. Jones has rather successfully curated a body of work that not only documents, but also questions the notion of crises in the context of uneven development and, more specifically, in left behind places. It manages to be both comprehensive and inclusive, thoroughly researched and accessible, and highly theorized and policy relevant. It should be recognized as an important contribution to the fields of critical economic and political geographies, at what is ostensibly a defining moment for subnational economic development.’
– Margaret Cowell, Spatial Research and Planning

‘Jones provides us with a range and depth of theoretical foundations, arguments and empirics that gives the reader a variety of insights into the critiques of the economic policy in neoliberalism. The book memorably shows us that 'the need for new spatial frameworks and ways of coupling governance with regulation to hold down the global and ensure some level of social cohesion via applying the brakes on combined and uneven development has never been so urgent'. It provides not only with several highly relevant critical perspectives on the praxis within academia and in the public sphere in framing and managing the local, but it also offers a foundation of critique of neoliberal economic policy, discourses and place-making. Its application of theory in research and able linkage between theory and practical, concrete, ideas about government at the local level gives the reader not only the critical perspective but an idea of what can be done. This is a relevant book for any researcher or policymaker that grapples the linkage between institutional arrangements, governance, the changing contours of the economy, and the consequent effect on uneven development, resentment, and inequalities.’
– Andreas Erlström, Eurasian Geography and Economics