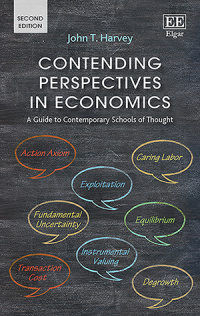 A Guide to Contemporary Schools of Thought

Key features of the second edition include:
• a brand-new chapter addressing the field of ecological economics

• extended discussion of the rise of Neoclassicism, along with an investigation of the possible differences between Neoclassical and mainstream economics

While primarily aimed at use in undergraduate courses, this broad yet comprehensive guide will no doubt be of value to any scholar wishing to gain a fresh perspective and greater understanding of the variety and breadth of current economic thought.

Critical Acclaim
'From the minute I had John Harvey’s book in my hand I knew it would have a great future and a second edition would be due very soon. Presenting competing theoretical perspectives in such an accessible way is the true great achievement of this book. You may use it as a core textbook in HET or as complementary reading in any teaching course. Its critical pluralist stance, represented in a most competent way, makes it a highlight in the field.'
– Wolfram Elsner, University of Bremen, Germany

‘The book is a good exercise in getting to know the broader economics profession, especially regarding the commonalities between the various schools of economic thought. The author should be applauded for his effort at remaining impartial, because that is clearly a difficult task. Hopefully, it will contribute to a better understanding of and resolution of some differences among the various schools. The result is both refreshing and thought provoking.’
– Mark Thornton, Quarterly Journal of Austrian Economics

‘This wise and lucid guide to pluralism in economics embodies the values of its cause. Generous, open-minded, fair, accurate and accessible: John Harvey's new book is a fine achievement that every economics major should read.’
– James K. Galbraith, The University of Texas at Austin, US

‘Fifty years ago I used Robert L. Heilbroner's The Worldly Philosophers to get students excited about economics. Today I would use John T. Harvey's Contending Perspectives in Economics. The book is beautifully written and full of insights into who economists are and why they think the way they do.’
– Paul D. Bush, California State University, Fresno, US

‘Economics is a mess. Oppositional clans (“schools”), pseudo-science, corruption of various kinds and relentless disdain for the real-world predominate. If you are thinking of entering this war-zone, then reading John Harvey’s Contending Perspectives in Economics is your best bet for retaining your intellectual health.’
– Edward Fullbrook, University of the West of England, UK

'I just finished reading the book! I feel like I learned so much from it, and not just in terms of the information itself. As I read, it stimulated so much thought I found myself writing many pages on things I'd never even thought about!'
– Marcus Schiebold, Economics Undergraduate Student, University of North Texas, US
Contents
Contents: 1. Introduction 2. Economics as a scientific discipline 3. Neoclassical economics 4. Marxism 5. Austrian economics 6. Post Keynesian economics 7. Institutionalism 8. New Institutionalism 9. Feminist economics 10. Ecological Economics 11. Conclusions Index
Add to Wish List