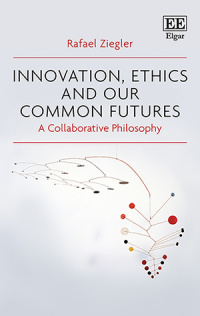 Critical Acclaim
‘Ziegler makes a brilliant contribution to the investigation of some of the most urgent ethical issues of the twenty-first century.’
– Michel Bourban, Prometheus: Critical Studies in Innovation

‘I have found Ziegler’s Innovation, ethics and our common futures a very inspirational book. It opens up new ways for engaging with one of the most pressing challenges of our times and offers bold new ideas, which give fresh impetus to the discourse on innovation. I highly recommend reading the book for anyone interested in the philosophy of innovation and sustainability.’
– Job Timmermans, Philosophy of Management

‘Innovation, Ethics and Our Common Future provides a timely contribution to the critical reflection of the role of innovation in the light of the unsustainability of modern-day (western) societies.’
– Rick Hölsgens, NOvation

‘Innovations presume to be improvements, but such presumptions are essentially contested. As Ziegler shows, such contest has deep roots in ethics. Ziegler’s book for the first time connects studies on social innovations with reflections from ethical theories. It analyses evaluative perspectives which determine what counts as innovation. I see Ziegler’s approach as a groundbreaking paradigm shift in the theory of innovation. It fulfills the idea that books on innovations should be innovative in themselves.’
– Konrad Ott, Kiel University, Germany

How to Develop a Sustainable Business School