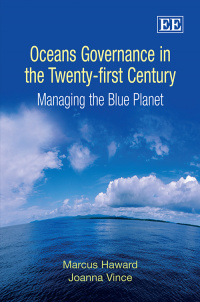 Oceans Governance in the Twenty-first Century

More Information
Critical Acclaim
Contents
More Information
Oceans Governance in the Twenty-first Century analyses the development of national, regional and international initiatives and arrangements directed towards governance of the world's seas and oceans.

The authors examine those factors that shape oceans governance, as well as the supports and constraints affecting policy development and implementation. In addition, the book invaluably includes discussion of contemporary international and selected regional initiatives – including the development of a maritime policy by the EU. The processes and outcomes that have arisen in the development of oceans policy in Australia, Canada, New Zealand and the US are also summarised. This analysis centres on the key elements of institutional design, policy capacity, and the policy framework adopted as important supports to facilitate integrated oceans management. The book concludes that, despite increased attention to the oceans over the past two decades, major challenges remain, even where states have made concerted efforts to develop new approaches to ocean management.

Marcus Haward and Joanna Vince’s thorough study will appeal to researchers and academics at under and postgraduate levels working in the field of environmental management, as well as oceans and coastal management and governance. It will also be highly useful to policy makers with responsibilities for oceans and coastal management.
Critical Acclaim
‘This book is recommended for anyone wanting to quickly get up to speed with oceans governance, bearing in mind at this stage it is an immature and quickly developing field. The strength of the book is that it is grounded in real-world examples from four case study countries and in this context at the very least exposes the reader to emergent oceans governance and policy issues. . . an excellent starting point for further analysis of oceans governance and sets up a research agenda for the future.’
– Murray Patterson, Journal of Ecological Economics