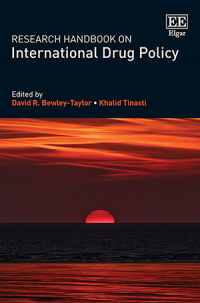 9781788117050 Edward Elgar Publishing
Edited by David R. Bewley-Taylor, Professor of International Relations and Public Policy and Director of the Global Drug Policy Observatory, Swansea University, UK and Khalid Tinasti, Graduate Institute of International and Development Studies, Switzerland
Publication Date: 2020 ISBN: 978 1 78811 705 0 Extent: 424 pp
Analysing arguably one of the most controversial areas in public policy, this pioneering Research Handbook brings together contributions from expert researchers to provide a global overview of the shifting dynamics of drug policy. Emphasising connections between the domestic and the international, contributors illustrate the intersections between drug policy, human rights obligations and the 2030 Sustainable Development Agenda, offering an insightful analysis of the regional dynamics of drug control and the contemporary and emerging problems it is facing.

More Information
Critical Acclaim
Contributors
Contents
More Information
Analysing arguably one of the most contested areas in public policy, this pioneering Research Handbook brings together contributions from a variety of researchers and practitioners to provide a global overview of the shifting dynamics of drug policy.

Chapters tackle a complex and cross-cutting issue from inter- and multi-disciplinary perspectives, incorporating political science, history, law and public health into their analyses. Emphasizing connections between the domestic and the international, this timely Research Handbook illustrates the intersections between drug policy, human rights obligations and the 2030 Sustainable Development Agenda. Integrating detailed discussion of ever-evolving drug markets, a diverse range of policy responses, and political and ideological tensions, the contributors offer an insightful analysis of the regional dynamics of drug control, its historic constructions, and the contemporary and emerging problems it is facing.

Aimed at researchers and students interested in drug policy, as well as policy-makers and practitioners at different levels of governance, the Research Handbook on International Drug Policy provides a much-needed comparative approach and will prove to be an essential resource for navigating the difficulties surrounding drug policy and control.

Critical Acclaim
‘For both the drug-specific and the wider issues raised, the book is to be welcomed for its insights and examples and is a valuable addition to third wave literature.’
– Blaine Stothhard, Journal of Illicit Economics and Development

‘The editorship and a welcome international group of authors from six continents adding diverse interpretations to familiar discussions, wide thematic coverage, and reminders of the growing reform movement combine to make this an impressive collection. The book sees the hegemony of the global order as being increasingly 'disregarded' and is an important critical reminder that a human rights framework might not be the 'right fit' for international drug policy as the latter requires more worldly values of open debate, diversity, freedom, and equal participation of national governments in shaping policies.’
– Blaine Stothard and Aysel Sultan, Drugs: Education, Prevention and Policy