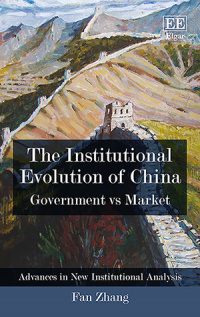 The Institutional Evolution of China

9781784716905 Edward Elgar Publishing
Advances in New Institutional Analysis series
Fan Zhang, National School of Development, Peking University, China
Publication Date: 2018 ISBN: 978 1 78471 690 5 Extent: 320 pp
China’s experience over the past decades is not just a story of economic growth, it is also one of institutional change. The current political-economic system is a bureaucratic market system, in which the government and the market both coexist and conflict with each other. This book gives a detailed description of the institutional evolution in China, using large amounts of documents and cases. The book provides a theory explaining the origin of China’s reform, the political and economic forces driving the reform, and the reasoning behind the stagnation and turn-over of reform.

More Information
Critical Acclaim
Contents
More Information
China’s recent evolution is not only a story of extraordinary economic growth but also a story of great institutional change. Fan Zhang challenges traditional theory to explain the real origins of China’s reform, the political and economic forces driving it, and the reasoning behind its stagnation. The institutional re-arrangement of government and market has been crucial in this marketization process.

Using a wealth of documents and cases, Zhang provides a detailed analysis of China’s institutional changes over the past 40 years, focusing on the government-market relationship. A theoretical framework is presented to explain the targets and incentives of government and business firms in a bureaucratic-market system, which promoted economic growth, but also fostered corruption and resulted in a re-centralisation of the system. Using an index of marketization in China since 1978, Zhang shows that overall, market expansion has continued but with diminishing marginal gains. The government control of financial resources that had previously been relaxed in the early years of reform has been enhanced to some extent as a result of the changing institutional environment.

Policy makers dealing with China-related policies, researchers and postgraduate students in political science, economics and Chinese studies will find this book a compelling exploration of the current and constant cooperation and conflict between government and market.

Critical Acclaim
‘Professor Fan Zhang's book provides an illuminating framework for understanding the logic of reforms in China. Being an expert on institutional economics and having personally participated in policy-making during the 1980s, Fan Zhang has come up with a powerful argument that the support from a winning political coalition is a key determinant of economic reforms. The book makes this point with vivid examples of reforms on agriculture, state-owned-enterprises, product market and financial systems. A must-read on reforms in China.’
– Tianyang Xi, Peking University, China

‘The essence of China’s more than three decades of economic reforms is the change of institutions. This book briefly and systematically records this process starting from the late 1970s up to early 2017. It is a good textbook for teaching Chinese economy in universities; and a good reference for scholars studying China.’
– Chenggang Xu, Cheung Kong Graduate School of Business, China
Contents
Contents: Introduction to The Institutional Evolution of China 1. Analytical Framework 2. From Command-and-Control to Reform: 1949-1978 3. Reform 1979-1989: Building Market Institutions 4. Reform and Political Coalition: 1990-2003 5. Stagnation: 2003-2012 6. The Post-Reform Period: 2012-Present 7. Lessons Learned and Long-Term Expectations References Index