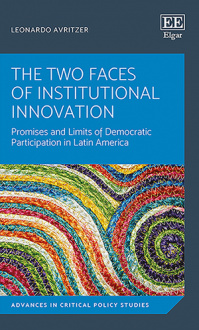 The Two Faces of Institutional Innovation

Promises and Limits of Democratic Participation in Latin America

The Two Faces of Institutional Innovation offers a new perspective on developments such as participatory budgeting, the National Electoral Institute (INE) and the Federal Electoral Institute (IFE) in Mexico and comités de vigilancia in Bolivia, and evaluates the extent to which, in reality, citizens were involved in decision-making, distributive policies and citizen education. Further chapters also examine the expansion of innovation to the field of judicial institutions – one of the key areas in which innovation took place in Latin America, showing that the role of legal corporations in democracy cannot be compared with the role of engaged citizens.


Contemporary and astute, this book will captivate students and scholars researching in the areas of innovation policy and regulatory governance. Its analysis of the positive and negative aspects of democratic innovation will also benefit democratic theorists and policy-makers alike.

Critical Acclaim
‘It is a truism to say that to understand democracy one must go beyond elections and the activities of the political class, and delve into the entrails of the bureaucracy and the judiciary. The execution is complicated, because it requires navigating a forest of rules and regulations and dissecting numerous small-scale decisions, but this book offers excellent examples of how to go about this task.’
– David Lehmann, Journal of Latin American Studies

‘Avritzer’s groundbreaking book demonstrates how different trajectories of innovations affect both democratic politics and the rule of law. The book highlights how democratic innovations expand citizens’ voice and broaden the public sphere. In contrast, innovations initiated with the judicial branch not only limit democratic practices, but also make it more difficult to craft a functioning rule of law because there are few accountability checks over judicial actions. Avritzer’s book makes an excellent contribution to debates on democratic politics and the rule of law in new democracies.’
– Brian Wampler, Boise State University, US

‘Most students of democratization since 1974 (myself included) were wrong and Leonardo Avritzer has proven us so. We assumed (and complained) that in these seventy or so cases, almost all of the effort in regime change was devoted to simply imitating preceding “real-existing democracies.” His book documents and analyzes an extraordinary variety of efforts at institutional innovation in these neo-democracies, mostly in Latin America (and especially in his native Brazil). It is enlightening reading for anyone studying democratization and obligatory reading for anyone interested in improving the quality of “real and recent existing” democracy.’
– Philippe C. Schmitter, European University Institute, Italy