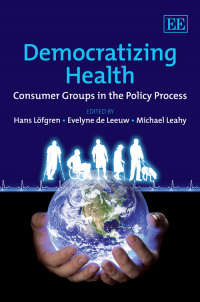 In an age of shifting boundaries between state and civil society, consumer groups are potentially drivers of democratisation in the health domain. The expert contributors explore how their activities bring new dynamics to relations between service providers, the medical profession, government agencies, and other policy actors. This book is unique in comprehensively analysing the opportunities and dilemmas of this type of activism, including ambiguous partnerships between consumer groups and stakeholders such as the pharmaceutical industry. These themes are explored within an internationally comparative framework, with case studies from various countries.

2. Health Activism in the Age of Governance
Timothy Milewa

16. Health Consumer Groups and the Pharmaceutical Industry: Is Transparency the Answer?
Agnes Vitry and Hans Löfgren